8.5 ლარი
ყიდვა
სარჩევი
01. Pipa, Nightingale Violet and Bat Pepe Once, the white mouse Pipa heard a cheerful trill and decided to find out to whom this charming warble belonged. The unknown singer turned out to be a nightingale living in the neighbor in a cage.
The nightingale ’ s name was Violet. She was an incredible singer and continuously cherished her art of singing.
Thanks to extraordinary hearing, she listened to distant birdcalls, and then repeated the various melodies.
By doing so, it was as if she was no longer alone in the cage and she knew all the birds, who were now connected to her through their chirping, and who in turn heard her trill far beyond.
Pipa was also kept alone in a cage, supposedly for her own protection. “ But what was safety from a hungry cat if she could not be free? ” - Pipa wondered.
“ Why is the cat not sitting in a cage to protect itself from the dog? ” - Pipa asked the fish swimming alone in the tank. The fish, named Sharky, did not answer. In fact, he never spoke to anyone and pretended that nobody was there. He was a very arrogant fellow.
“ Why is the dog chained all the time instead? ” - Pipa went on, trying to annoy Sharky, but her attempts at conversation were met with more silence.
It was said that the cat had caught the other fish in the tank and eaten them, which is how Sharky had ended up alone. “ Maybe this was what had made him cruel and reluctant to speak? ” – Pipa assumed that the cat was really a very dangerous creature and named it Guardian, because it chased everybody and kept watch and controlled almost everything around.   Guardian was hostile to everyone who sympathized with the dog, whose name was Lucky, and that is why Pipa and Lucky were devoted friends. 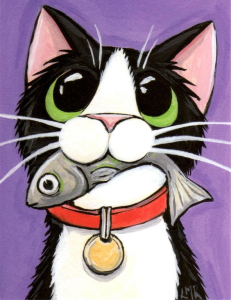 Pipa decided that Guardian ruled their lives: even the human obeyed him and fulfilled his every wish, meaning he had a carefree life.
From time to time, when the cat went for a walk in the garden, the man opened the door of Pipa's cage and they played together. He let Pipa sit on his shoulders and taught her to navigate a maze.
Guardian sometimes let the man and dog go outdoors together.   The cat then used the time to play with the nightingale, who was not happy at all with this. On the contrary, it was frightened and flapped wildly against the bars of the cage, flying back and forth in a panic.
Pipa decided to help the nightingale in some way.
“ What can I do to get the cat to transfer its dangerous interest to me? ” - Pipa wondered.
Although she was very much afraid, she dared to poke her tail out of the cage. Guardian noticed this immediately and prepared to attack. The cat crouched on its front paws, pushed off on its hind legs and in one jump pounced on the tail of the mouse. 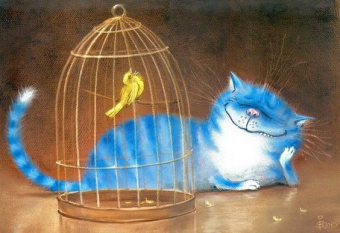 Pipa was so frightened, she jumped back and fainted. When she opened her eyes, she saw Guardian ’ s claws and frightening gaze as he stared at her without blinking. The cat sat and waited patiently for Pipa's tail to appear outside the bars of the cage again. It was a long, tiring time until the man and dog got home and Guardian finally left Pipa alone.
This went on for several days and Pipa gradually got used to Guardian being close and so lost her fear of him.
It